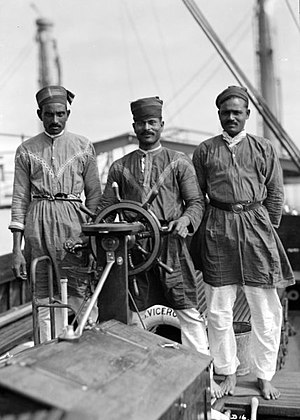 As the British maritime trade expanded throughout the 19th and 20th centuries, ships began to look further afield for seasoned sailors. Indian seamen – or “Lascars” – had been serving on European ships since Vasco da Gama hired an Indian pilot in the late 15th century, so naturally, the British shipping lines turned to this ready force. Throughout the 1870s, a huge number of Lascars were contracted into service for the United Kingdom, as the British East India Company recruited seamen from Yemen, Assam, Bengal, and Gujarat.

The Lascars played a valuable role throughout this period, and manned many British ships through times of war and times of peace. Their skillful ship handling ensured safe passage of merchandise as it was shipped from the Orient to London and other British ports.

Despite their skill and invaluable contribution to the commerce of the day, the Lascars were unfortunately treated very unfairly. They served on the British ships under “lascar agreements”, which gave ship owners an undue power over the Indian sailors.

Lascars were paid a pittance, making a mere 5% of the white sailors’ wages, while being expected to work at far longer hours. They were given food in smaller portions and of inferior quality. They were often quartered in the most cramped and dingy areas of the ship with the poorest ventilation.

The Lascars lived under conditions not unlike slavery, as ship owners could retain their services for up to three years at a time, transferring them from one ship to the next on a whim. They sometimes served as deck crewmen, though more often they worked as stokers below decks, as the task was deemed to be below the dignity of a white man.

Not surprisingly, there were many desertions among the lascar ranks. Others were forced to wait in England for long periods before they could find work on a ship returning to India. When the Navigation Acts were passed, many Indian sailors arriving in London could not even be reemployed for return journeys, and thus, they were simply abandoned.

The impoverished and ill-prepared Lascars would be left to fend for themselves, wandering the streets of London, Liverpool and other ports, often forced to beg in order to survive. Many took up low-paying, menial jobs sweeping streets or peddling. Initially, many would sleep out on the streets or in sheds on the docks.

Eventually, the ports at London, Liverpool, Southampton, Cardiff, Manchester, and Glasgow began to provide temporary housing for the Lascars; though these barrack homes were often filthy and pest-ridden. By the 1930s, conditions had improved somewhat, and Lascars  were able to find lodging and eventually employment through The Stranger’s Home or other similar Indian lodging houses in East London.

A substantial community of Indian sailors grew up in East London, Liverpool, and other seaport towns, and by World War I, there were 51,616 Lascars settled across Britain. As the Indian sailors integrated into the community, many of their customs and festivals became part of the British social scene. A Parsi chapel and cemetery were established, and eventually a mosque.

Many of the Lascars took British wives, and thus further integrated into the British culture and community. In fact, at one point, the Lascar seamen were almost exclusively marrying white women as there were very few Indian women in England at the time. While some expressed disgust over this interracial marriage, there were no legal restrictions against the mixed marriages. This resulted in a strong interracial community being established in Britain’s major port cities.