Cecil Rhodes was anxious to occupy the territories of Mashonaland and Matabeleland in Southern Rhodesia before the Germans, Portuguese or Boers could get to it. To accomplish this, Rhodes and his British South Africa Company raised the Pioneer Column.

Rhodes approached the Matabele King Lobengula and persuaded him to sign a treaty in 1888. This treaty gave Rhodes full rights to mining and administration (though not particularly to settlement), throughout the area of Mashonland. Using this Rudd Concession (as the treaty was dubbed), Rhodes approached the British government for a charter which would allow him to occupy the territory. The British South Africa Company was granted the right to form an armed body of men to protect the Pioneer Column as they travelled across Africa.

Rhodes’s military advisers were wary of how Lobengula would react when he realized that Rhodes intended not only to mine, but to occupy the land that he had granted. The military advisers were almost certain that war would break out, and estimated that it would take 2,500 men and approximately one million pounds to accomplish their goals.

A young adventurer by the name of Frank Johnson wasn’t nearly so cautious, however. He proposed to deliver the territory within nine months, for no more than £87,500, and with a mere 250 men. Johnson recruited Frederick Selous, a hunter with an excellent knowledge of the region, to act as the Column’s guide. He then began recruiting men for the expedition by offering each volunteer 15 mining claims and 3000 acres of land in the newly claimed territories. 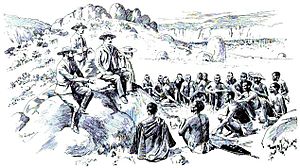 They received thousands of eager applicants; however, Rhodes cleverly selected sons from rich families. He predicted that if the Column was indeed attacked and in danger, the wealthy families would be more successful in enlisting help from the British government.  The Pioneer Column was placed under the command of Irishman Lieutenant Colonel Edward Pennefather, an officer of the 6th Inniskilling Dragoons.

The initial Column was made up of 180 colonists, 200 volunteers and 62 wagons. Another group soon attached themselves to the Column, adding 110 men, 16 wagons, 130 horses, and 250 cattle. They set out from Macloutsie on June 28, 1890, and arrived on September 12 at a flat, marshy meadow protected by steep rocky hills. The British flag was hoisted over the plain the following day, and settlement began.

Three towns were founded nearby: Fort Victoria (now named Masvingo), Fort Charter, and Fort Salisbury. The Pioneer Corps was disbanded and each of the members was given the promised lands on which they could begin farming.

In one fell swoop, the Pioneer Column drastically changed the destiny of this previously neglected territory. What was once an undeveloped backwater became a productive region that has achieved great things since its founding.