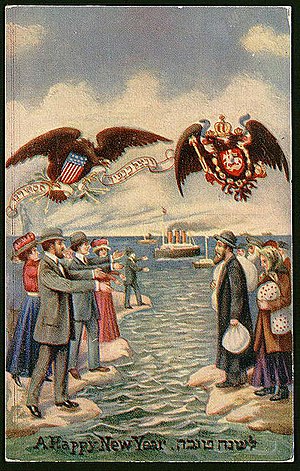 The 19th century saw increasingly hard times and harsh persecution for Jews throughout Eastern Europe. Many Jews had emigrated to Eastern Europe in medieval times. They lived for many years under Polish rule; however, when the kingdom of Poland was divided in the late 1700s, a huge percentage of the Jewish population suddenly found themselves under Russian rule.

By the late 19th century, the Jewish people found conditions harsh and restrictive. They were confined to the Pale of Settlement, a section of western Russia between the Black Sea and the Baltic. Opportunities for employment were limited, as the Jews were only permitted to work in certain occupations. Most worked as artisans, tailors, metal workers, or carpenters. Many Jewish boys were forced into the Russian army, where they were required to serve for 25 years, facing a high risk of death and guaranteed brutality.

The local population was hostile, actively barring Jewish children from public schools, and increasingly forcing Jews out of villages into smaller towns. In 1882, the May Laws were passed, which forced the Jews in the Pale of Settlement to live in only a few select towns.

These towns were severely overcrowded, and the Jews had to compete fiercely for the few available jobs. Due to the intense competition, wages dropped far below the poverty line. Those not confined to towns fared little better, scratching out a meager existence on tiny farms.

Because they were so pressed, the Jews formed tightly-knit communities. They spoke Yiddish before learning Polish or Russian, and religious customs were strictly observed.

Following the assassination of Tsar Alexander II in 1881, the persecution of Jews took on a new vengeance. A young Jewish woman was associated with the assassins, and this spurred the population on to violent attacks on Jews during the 1880s. Jews in Russia and throughout Eastern Europe lived in constant fear of violence, theft, and ever harsher restrictions.

This spurred a mass emigration to freedom as the Jews sought to escape the dangers and persecution of Eastern Europe. Between 1881 and 1914, over 2 million Jews left Eastern Europe looking for a new home.

Many, in fact, intended to go to America; however, upon arrival in England, over 120,000 Jews settled and stayed. Once again, Spitalfields drew an incoming population. The Jews were attracted by the opportunity for cheap living, and by 1900, a huge percentage of the Spitalfields population was Jewish.

Unfortunately, the Jews did not receive the warm welcome that the Huguenots had enjoyed. Overcrowding was horrific as the beautiful Huguenot structures were subdivided to house the huge population. Sanitization was a nightmare, and living conditions (in many cases) were scarcely better than those the Jews had left behind.

The huge Jewish immigration caused some friction amongst locals. The Jews were accused of taking local jobs and aggravating the already appalling working conditions present in many of the local businesses. Because the Jews were willing to accept overcrowded conditions, rents in the area shot up, further irritating the local population. Because of the unrest, the first Aliens Act was put into effect, restricting immigration into the country.

Soon, however, the Jewish population began to thrive, making themselves a distinct and prominent presence in the East End. Their tight-knit communities allowed them to hold on to their cultural heritage, with Yiddish being predominantly used as a spoken and written language.

The Jewish population developed into a vibrant community, centered in the East End. Small synagogues popped up throughout the community, providing a focal point for the Jewish population. Kosher butchers and food providers found huge success with acceptable foods being in high-demand. The Jewish Chronicle newspaper was widely read and Jewish trade unions flourished.

In time, much of the Jewish population became integrated into London society. People spoke Yiddish less and less, religious rituals were less distinctive, and Jewish children were noted to be “almost indistinguishable” from English children.

In time, the Jews too, moved away from Spitalfields. Unlike the Huguenots, the Jews left little to mark their time in the East End. Though the Jewish East End shows little of its history, the Jewish legacy and heritage has carried on to new generations throughout the UK.

One Reply to “Diaspora in the East End”