For much of the 16th century, Ulster was a wild and wooly place. The region was thickly wooded, scarcely developed, and (according to the English) under populated. Early attempts at settlement (circa 1570) were unsuccessful, and until the region was conquered during the Nine Years War in the 1590s, it was primarily inhabited by nomadic Gaelic Irish.

Permanent residences were scarce, and bloody skirmishes between clans and between the Gaelic and the English led to a very sparse population. In fact, by 1600, the total population of Ulster hovered as low as 25,000.

The English gradually broke the power of the clan chieftains as they conquered Ireland piece by piece throughout the 16th century. The Gaelic chieftains led by Hugh O’Neill surrendered to the English in 1603, and were granted generous land and terms under the Treaty of Mellifont.

A few short years later, however, O’Neill and other rebel chieftains fled Ireland in the hopes of raising Spanish support for a new rebellion. The English government saw this as an opportunity to colonize and “civilize” the region, and promptly seized the rebel lands. The original plan was to award grants of land to Irish lords who had sided with the English during the war; however, after the rebellion in 1608, those plans quickly changed.

King James VI and his counselors conceived of the Plantation of Ulster and a joint English and Scottish venture. King James wanted to reward his subjects in Scotland, where he had once reigned before becoming King of England.

Thus, plans were made for the plantation of six counties in Ulster: Armagh, Cavan, Coleraine, Donegal, Fermanagh, and Tyrone. The plan was to establish strong settlements to bring stability to the region. James wanted to prevent further rebellion, and to that purpose, he confiscated not only rebel lands, but all the land in the region.

The majority of the land was granted to wealthy English and Scottish “Undertakers” (so named for “undertaking” the plantation of the region). A quarter of the land was awarded to select Irish landowners (or Planters); however, Irish peasants were relocated to live near British garrisons and Protestant churches.

All Undertakers and Planters were granted up to 3000 acres of profitable land (not mountains or bogs), but they were held to specific terms. They were strictly barred from selling any lands to Irishmen, and were required to bring a minimum of 48 English-speaking, Protestant adult males to settle on their land. They were also required to build defenses, in the hopes of establishing a strongly loyal British community that could successfully stand up to any future Irish rebellion.

Eventually, veterans of the Nine Years War requested and were granted lands of their own in Ulster. These officers had limited resources to fund their colonization, however, so their establishment was subsidized by London guilds.

From 1606 on, a substantial number of lowland Scots moved into the Ulster settlements. Many of the initial settlers were led by James Hamilton and Hugh Montgomery. Sir Randall MacDonnell soon followed in 1607, bringing 300 Presbyterian Scots to settle on his lands in Antrim.

1609 brought a veritable flood of English and Scottish settlers into Ulster, as Undertakers populated their estates and the surrounding regions. As immigrants came through the Londonderry and Carrickfergus ports, some didn’t like the land that was allotted to them, and instead struck out to build farms and homesteads, further populating the virgin territory.

By 1622, the Scottish and English population in Ireland had grown significantly, numbering around 19,000 throughout Ulster, Antrim and Down. By the 1630s, that number was as high as 80,000. Since roughly half the immigrants were female, the settler population was able to grow even faster.

Because settlements were under threat by roving bandits, military garrisons and fortified towns sprung up fairly quickly. Interestingly, most modern towns in the Ulster region date back to this period of plantation.

Those early settlers left a legacy that continues to this day. The Plantation of Ulster is arguably the source of much of the bad blood that exists between Irish Catholics and British Protestants today. Many Scottish names can be traced back to the early settlers (though Protestant/Catholic beliefs are poor indicator of heritage). And finally, the Plantation settlers contributed many words to the Ulster dialect that are still in use today. 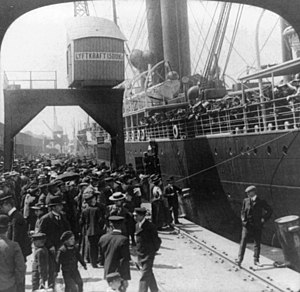